"So then, when the Lord Jesus had spoken to them, He was received up into heaven and sat down at the right hand of God"

What does it mean to say that Jesus ascended into heaven? Catechism of the Catholic Church answers(4)... 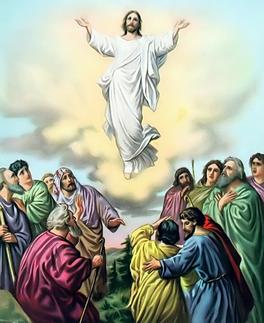 The Solemnity of the Ascension of the Lord (colloquially known as Ascension Thursday or Ascension Day) is one of the great solemnities, in the Christian liturgical calendar, and commemorates the bodily Ascension of Jesus into heaven in the presence of his apostles.(1) & (2)  Ascension Day occurred on the 40th day of Easter, so it falls on a Thursday, and thus is often called Ascension Thursday.(2) Traditionally celebrated on Thursday, it has, however, in some Roman Catholic provinces, been moved to the following Sunday for observance. The feast is one of the ecumenical feasts (i.e., universally celebrated), ranking with the feasts of the Passion, of Easter, and Pentecost. The day is a holy day of obligation.(3)​