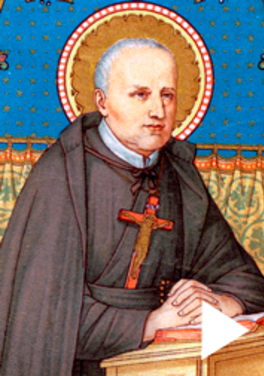 Clement was greatly known for his lifelong dedication to the care of the poor during a tumultuous period of Europe's history, which left thousands in destitution. He worked to care for the Polish people, until he was expelled from there and moved to Austria.

​Hofbauer spent the remainder of his life in Vienna. There he established a monastery and continued to seek government approbation for Redemptorist houses, which was granted shortly after his death in 1820. He was canonised on May 20, 1909 and named patron saint of Vienna in 1914 by Saint Pius X. (5).

Ref. (1) Franciscan Media; (2) Sacramentary and Lectionary Supplement, The Congregation of the most Holy Redeemer, 2007; (3) Wikipedia; (4) Lives of the Saints; (5) Britannica.

Clement might be called the second founder of the Redemptorists, as it was he who carried the congregation of Saint Alphonsus Liguori to the people north of the Alps.(1) Born in Tasswitz in Moravia (Czech Republic) on December 26, 1751, Clement worked as an apprentice baker (2) in a monastery where he was allowed to attend Latin classes.

He made three pilgrimages to Rome, and during the third, accompanied by a good friend, he entered with the same friend the Redemptorist novitiate at San Giuliano in Rome. The two were professed on 19 March 1785 (feastday of Saint Joseph) and ordained ten days later to the priesthood (3) at the Cathedral of Alatri.​​ The two priests were sent in the same year to found a house north of the Alps, and Saint Alphonsus, Founder of the Redemptorist Order, prophesied their success. (4)