​​​"Do not look upon Him as a high and mighty lord who desires to speak only to great ones–and then, only of great things. Our God delights in stooping down to converse with us, and He rejoices when we make known to Him our most trivial everyday affairs. Such is His love and care for you that He seems to have no one else but you of whom to think."

A Novena to St. Alphonsus: 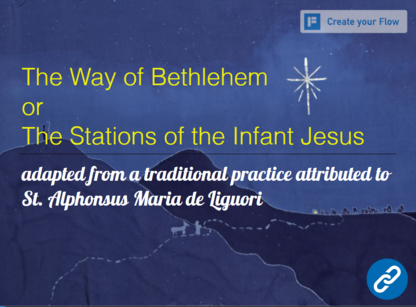 ​​"You ought therefore never to forget God's presence, as most men do. Speak to Him as often as you can, for it does not tire Him, nor does He hold it in contempt, as do great men of the world."

​Alphonsus Mary (Maria) de Liguoriwas born to Donna Anna Cavalieri and Don Joseph de Liguori at Marianella, near Naples, Italy, on 27 September 1696  In his youth, Alfonsus studied law before entering into successful practice. But even in his high-profile career he was never far from the poor. While accompanying patients in the Hospital of the Incurables he came to know he was meant for something else. On 28 August 1723, when he was at the Hospital, he suddenly found himself surrounded by a mysterious light; the house seem to rock and an interior voice said, "Leave the world and give thyself to Me." This occurred twice. Alphonsus left the Hospital and went to the church of the Redemption of Captives. Here he laid his sword before the statue of Our Lady, and made a solemn resolution to enter the ecclesiastical state, and furthermore to offer himself as a novice to the Fathers of the Oratory. On 23 October of that same year, the Saint put on the clerical dress. On 21 December of 1726, at the age of thirty, he was ordained priest. On 9 November 1732, Alphonsus founded the Congregation of the Most Holy Redeemer when Blessed Maria Celeste Crostarosa told him that it had been revealed to her that he was the one God had chosen to found the congregation. Its goal was to teach and preach in the slums of cities and other poor places. Members of this Community are known as Redemptorists. A companion congregation of nuns, called Order of the Most Holy Redeemer, had been founded a year earlier by Blessed Crostarosa.

It was comparatively late in life that Alphonsus became a writer. His first works, a tiny volume called "Visits to the Blessed Sacrament", only appeared in 1744 or 1745, when he was nearly fifty years old. Three years later he published the first sketch of his "Moral Theology". A total of nine editions of this book appeared in the Saint's life. Alphonsus was a great theologian, and so attached much weight to intrinsic probability. He was not afraid of making up his mind. "I follow my conscience", he wrote in 1764, "and when reason persuades me I make little account of moralists."  The Saint also wrote a large number of dogmatic and ascetical works nearly all in the vernacular. He was a poet and musician and his hymns, especially  "Tu scendi dalle stelle" (translated: "You come down from the stars")*, a Christmas carol, are justly celebrated in Italy.  *Click here to hear different versions of this popular song. For another of the Saint's composition, you may wish to listen to "Fermarono i Cieli ("They stopped the heavens") (Maria contempla il Bambinello che dorme) ("Mary contemplates the Baby sleeping")", and "O Bread Of Heaven".

​At three different times in his missions, while preaching, a ray of light from a picture of Our Lady darted towards him, and he fell into an ecstasy before the people. In old age, he was more than once raised in the air when speaking of God. His intercession healed the sick; he read the secrets of hearts, and foretold the future. On 1 August 1787, as the midday Angelus was ringing, the Saint passed peacefully to his reward. He was almost 91 years old. He was declared "Venerable" on 4 May 1796, was beatified in 1816, and canonized in 1839. In 1871, he was declared a Doctor of the Church. 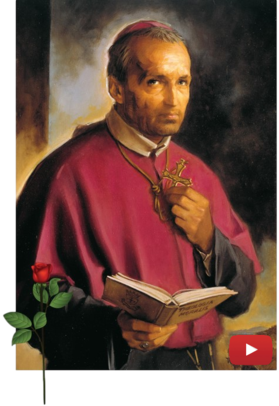 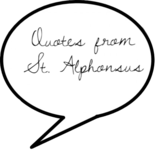