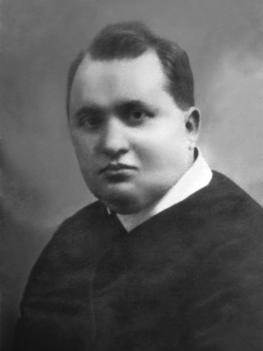 Zynoviy (Zenon) Kovalyk was born on 18 August 1903 in the village of Ivachiv Dolishniy, near Ternopil in Austrian Galicia (western Ukraine). His family were peasant workers and like many of that time and place, were devout Christians. Perhaps it was due to his family’s devotion that Zynoviy developed a vocation to the Catholic priesthood while he was still young. He was known to have a good singing voice and a joyful temperament but also to be a person of strong character.(1)

He joined the Redemptorists and professed vows on 28 August 1926. He studied philosophy and theology in Belgium and was ordained on 9 August 1932. He went with Bishop Charnetskyi to Volyn as a parish missionary and subsequently to Stanislaviv where he also conducted missions.(2) His joyful disposition was loved by the confreres and the people, who listened to his homilies with admiration.

Fr. Kovalyk courageously preached the Word of God and love for the Mother of God. His preaching strengthened the faith of the people and encouraged them to remain faithful to God and the Church. Because of this the communists detested him. The confreres and his friends warned him of the danger and asked him to be more cautious with his expressions, but he responded, saying: “If it is God’s will, I am ready to die, but I cannot be quiet in the face of such injustice.” (3)

The last great sermon by Fr. Kovalyk took place in Ternopil on 28 August 1940 on the occasion of the feast of the Dormition (passing of earthly life) of the Mother of God. That day, Fr. Kovalyk had some ten thousand faithful in his audience. His old dream of martyrdom was to come true in just a few months… On the night of 20-21 December 1940 the agents of the Soviet secret police entered the Redemptorist monastery to arrest Fr. Kovalyk for his sermons on the Novena of the Immaculate Conception of the Mother of God, which he had been delivering in the monastery’s church. Before leaving his confreres, Fr. Kovalyk asked his superior Fr. De Vocht for the last blessing and absolution. During his six months long imprisonment, Fr. Kovalyk continued his apostolic work. However, he underwent 28 painful interrogations; three times he was brought to other prisons and interrogated there. After one such interrogation, which was accompanied by especially cruel tortures, Fr. Kovalyk fell seriously ill due to considerable loss of blood. In 1941, when German troops started their offensive, the prison keepers, eager to flee but not able to take the prisoners along, started shooting the inmates. However, it was not enough for them just to shoot Fr. Kovalyk: reminding him of his sermons about the crucified Christ, they nailed Fr. Kovalyk to the prison wall in full view of his fellow prisoners. When German troops entered Lviv, they immediately opened the prisons to clean up the piles of corpses that had already started to decay. The people rushed to the prisons hoping to find their relatives. As the witnesses relate, the most horrible sight was that of a priest crucified upon the prison wall, his abdomen cut open and a dead human foetus pushed into the cut.(4)

On 23 April his martyrdom was verified by the Assembly of Cardinals, and on 24 April 2001 Most Holy Father John Paul II signed a decree of beatification of Fr. Zynoviy Kovalyk, a blessed martyr of Christian faith.(5)

​(2) Bishop Nicholas Charnetsky and Companions (from "Sacramentary and Lectionary Supplement, The Congregation of the Most Holy Redeemer; Published 2007")