The mother of Gerard, Donna Benedetta, often brought her children to Mass with her at the shrine of Our Lady of Graces at nearby Capotignano. And, like thousands of other small boys, then and now, Gerard was all eyes for the strange new things he saw. Not quite four, he was too young to know what was going on. But he did know this: he liked the “pretty lady with the baby.” 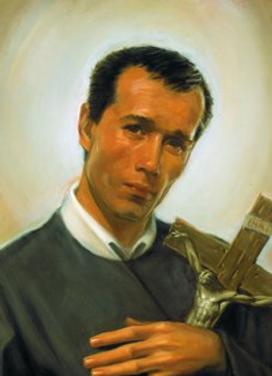 In 1749, at the age of 23, Gerard wanted to join the Redemptorist mission team visiting his village. However he was rejected and one of the mission team, Fr Cafaro, advised his family to detain him until after the mission has left the village. Benedetta bolted Gerard’s door the morning the Redemptorists left Muro. But later when she tiptoed into the room, he was not there. His bed-clothes, knotted together, streamed from the open window, and on a small table lay a scrap of paper: “Mother, I am off to become a saint,” it read. It was signed “Gerardo.” He had gone after the missionaries. In his work with the Redemptorists, Gerard was able to touch people in the depths of their being. He touched people in their consciences, guiding them to their own truth. He touched people in their hearts, revealing to them how boundless their own capacity for love was. He touched parents in their efforts to have a family and he did it in a way that they knew God and they were in this venture together. In Gerard’s touch, people knew that God was with them deep inside where no one else could reach, not even their loved ones.

One miracle in particular explains how Majella became known as the special patron of mothers. A few months before his death, he visited the Pirofalo family and accidentally dropped his handkerchief. One of the Pirofalo girls spotted the handkerchief moments after he had left the house, and she ran after Gerard to return it. "Keep it," he said to her. "You may need it some day."

Years later when the girl, now a married woman, was on the verge of dying in childbirth, she remembered the words of the saintly lay brother. She asked for the handkerchief to be brought to her. Almost immediately, the pain disappeared and she gave birth to a healthy child. That was no small feat in an era when only one out of three pregnancies resulted in a live birth, and word of the miracle spread quickly.

Because of the miracles that God worked through Gerard's prayers with mothers, the mothers of Italy took Gerard to their hearts and made him their patron. At the process of his beatification, one witness testified that he was known as "il santo dei felice parti," the saint of happy childbirths.

Towards later years, Gerard was afflicted with tuberculosis. The afternoon of October fifteenth, 1755, Gerard tried to sit up, crying to his confreres, “Look! Look! It is the Madonna!” and fell into a sudden ecstasy of love. That evening at seven-thirty, he died. He was 29 years, six months, and nine days old. For six years, he had been in religious life. To recount the happening after his death in 1755 would demand a large book. Because of the numerous miracles performed through the saint’s intercession, proceedings for his canonization were instituted shortly after his death. In 1893, he was beatified. Eleven years later on 11th December 1904, Pope Pius X proclaimed his solemn canonization at St. Peter’s in eternal Rome. Brother Gerard of Muro and Materdomini was now Saint Gerard of heaven and the whole world.

St. Gerard Majella is the patron of expectant mothers. Born at Muro, Italy, in 1726, he joined the Redemptorists at the age of 23, becoming a professed lay brother in 1752. He served as sacristan, gardener, porter, infirmarian, and tailor. However, because of his great piety, extraordinary wisdom, and his gift of reading consciences, he was permitted to counsel communities of religious women.

This humble servant of God also had the faculties of levitation and bi-location associated with certain mystics. His charity, obedience, and selfless service as well as his ceaseless mortification for Christ, made him the perfect model of lay brothers. He was afflicted with tuberculosis and died in 1755 at the age of twenty-nine.

"Mama, Mama, see what I got from the little boy.” In his hand he clutched a small roll of bread. Nobody paid him a bit of attention as he chattered about a pretty lady and her baby who had given him the bread. Small boys love to make up stories! But the next day he brought back another white roll, and again the next day, and the next. His mother decided to investigate. Next morning she followed her son. Off he ran the two miles to Capotignano, making straight for the chapel. Benedetta followed. It was then she saw who his playmate was – the Christ-Child himself. The statue of Our Lady of Graces had come to life. The infant climbed down from his Mother’s arms to romp with Gerard. A bewildered Benedetta ran home to Muro. At mealtime, little Gerard came back with another roll of bread.

"Here the Will of God is done, as God wills, and as long as God wills."
- ​Gerard Majella