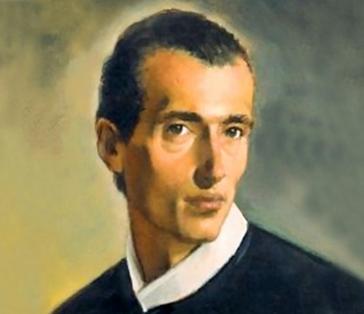 "We are a congregation of working priests, who go to the aid of the most abandoned souls in those poor places, to see that anyone who does not yet know God may come to know him.”

Bl. Sarnelli boldly responded to those who poked fun at the new Redemptorist Congregation. (3)

Father Don Januarius (also spelt "Gennaro") Maria Sarnelli was born at Naples, on 12th September 1702. Don Januarius manifested most pious dispositions from his very infancy; and he was even then remarkable for his angelic modesty, which caused him always to keep his eyes cast down in presence of women, even that of his sisters and mother. His obedience and submission to his parents were equally exemplary, and when he perceived that he had at all annoyed them, he used instantly to beg for forgiveness, and would kiss their hand or even throw himself at their feet in order to appease them. (1) He was ordained priest in 1732 and became a Redemptorist a year later. (2) He was so fond of meditation, that even when he was a secular, he used to steal time from business to go and pray in some church, but from the time he became a priest, he gave himself up unreservedly to this exercise.

Fr. Sarnelli worked especially in the countryside around the Amalfi coast, and from 1736, in Naples, for girls at risk from becoming prostitutes, for the sick, the aged and the imprisoned. He used daily to repair to the Church of the Cross of the Palace for this purpose, where he would shut himself in a little cell behind the sacristy, and remain in prayer from dinner-time until the evening; this was his daily practice until he entered the Chinese College, except when he went to the hospital. He received so much celestial light, and felt such holy ardour in meditation, and had such a gift of tears, that he himself owned that he had nearly lost his sight in consequence. The Gospel was the book from whence he derived all his light and consolation. “Scarcely had I read a few verses,” said he, “ere I was so enlightened by the Divine Goodness, that I melted into tears, and the world then appeared to me as nothing but smoke.”

Fr. Sarnelli had also a great devotion for the Blessed Trinity, in whose honour he celebrated Mass as often as he could, and tried to inspire every one with a devotion to this mystery. He also published a very pious book to propagate this devotion. He was also especially devout towards the Passion of Jesus Christ. His room was full of crosses and pictures to remind him of the sufferings of the Incarnate God, and he caused a great many to be made, which he distributed, that they might be placed in the different houses and streets. He had also the greatest devotion towards the Blessed Virgin, and especially towards her Immaculate Conception. In order to spread this devotion, he gave away a great quantity of pictures of her as well as of scapulars and rosaries, and his great delight during the recreation established in our congregation after dinner and supper, consisted in making rosaries, images, or scapulars. He had also a special love for the holy name of Mary.

During his last days he was always repeating devout aspirations; sometimes they were addressed to the Blessed Trinity. On the day of his death, his agony was peaceful, and lasted little more than half an hour; his rosary was around his arm all the time , and he clasped the crucifix in his hands, kissing it from time to time. The priest gave him absolution during this interval, after which he calmly expired, at ten o’clock on Thursday morning, June 30th,1744, aged forty-two. His happy death took place the day before the eve of the feast of the Visitation; thus the wish he had often expressed of dying during a novena to the Blessed Virgin was gratified. As soon as he was dead his countenance suddenly became most pleasing and beautiful, and a smile overspread his lips; his body exhaled such a sweet odour, that it scented the room where he died for a long time. John Paul II beatified him on May 12, 1996. Visit <www.sarnelliorphanage.org>, website for Sarnelli Home - run by the Redemptorists for abandoned children and children affected by HIV. The home is located in Northeast Thailand.