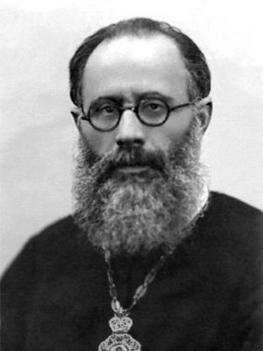 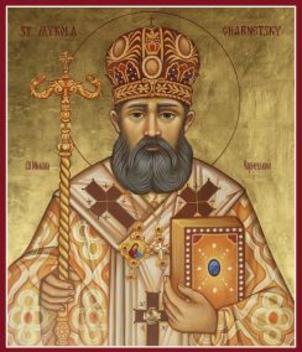 For some time, Fr. Charnetskyi had desired to live a more austere life than that of a seminary professor. In 1913 the Belgian province of the Redemptorists had established a mission in Ukraine and this included a novitiate near Lviv for those interested in joining the congregation. Like Father Ivan Ziatyk who was to follow him some years later, Fr. Charnetskyi entered the novitiate in 1919, and was ordained a Byzantine Rite Catholic priest at the age of twenty-four. Father Mykolay immediately began working in a nearby parish before being sent to teach at the minor seminary (for students in their teens) run by the Redemptorists. Over the years that followed, he served as a seminary professor and spiritual director. Five years after his appointment as apostolic visitor for the Byzantine Rite Catholics of Volyn and Polissia, Fr. Charnetskyi was consecrated a bishop in 1931 at the age of forty-six.(1)

​In 1945, the Russian Communists' secret police (the KGB) arrested Bishop Charnetskyi and sentenced him to a six-year term of hard labor in Siberia. Transferred numerous times, he served his sentence in thirty different prisons and labor camps, and was subjected to six hundred hours of interrogations and torture. Upon being diagnosed with a terminal illness, he was released in 1956. By then, he had spent 11 years in various prison camps where he ministered to other prisoners. Nearly three hundred priests who had previously yielded to the Soviet government's demand that they defect to the state-controlled Russian Orthodox Church came to Bishop Charnetskyi to confess their sins and be reconciled with the Catholic Church.(2)

By 1956, the bishop’s health was in such a dismal state that a shroud had already been prepared; the prison authorities then decided to release him in order that he die elsewhere. However, he made enough of a surprising partial recovery that he was able to pastor the Ukrainian Catholic community, which was then operating clandestinely. Although he lived under constant surveillance, one of his most important acts was to secretly prepare and ordain young men called to the Priesthood.(1) The lingering effects of Bishop Charnetskyi's earlier imprisonment led to his death on April 2, 1959.

​Due to many regarding him as a saint, people began visit his grave and to ask for his heavenly intercession immediately. Today people continue to claim that miracles happen through his intercession. On 23 April 2001 Bishop Charnetskyi's martyrdom was verified by the assembly of Cardinals. He was beatified by Pope John Paul II during his pastoral visit to Ukraine on 27 June 2001. This date was significant as it is the feast of Our Lady of Perpetual Help, the patroness of the Redemptorists.(1)

Mykolay Charnetskyi was born in the village of Semakivtsia, a hamlet in the Horodenka Raion in western Ukraine, on 14 December 1884. He came from a large family and was the eldest of nine children. His parents, Alexander and Parasceva Charnetskyi, and their children were devout members of the Ukrainian Greek Catholic Church which is in communion with the Bishop of Rome and is distinct from the Ukrainian Orthodox Church.

From a young age, Mykolay had expressed a desire to become a priest and when he was 18 years of age, the Ukrainian Catholic Bishop Hryhory Khomyshyn (who was himself to be martryed) sent him to study at the Ukrainian College in Rome. After his ordination to the Catholic priesthood in 1909, Fr. Charnetskyi returned from Ukraine to Rome so that he might complete a Doctorate in Theology, which he did the following year.

In life and death, Blessed Bishop Martyr Mykola, you exemplified the words of Our Lord, “A good shepherd lays down his life for the sheep.” Through your virtuous life and heroic death, you have attained the martyr’s crown of glory in the Heavenly Kingdom. O Healer of Souls, we beseech you, hear our prayers and intercede for our needs. Heal our physical and spiritual infirmities through your intercession with Our Lord and Savior Jesus Christ, the Supreme Physician of our bodies and souls. Amen.

“The Healer of Souls”