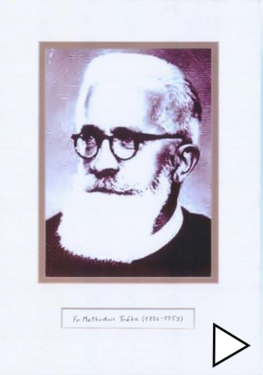 "Methodius Dominic Trcka also passed his life in the service of the Gospel and of the salvation of his brothers and sisters, even to the supreme sacrifice of his life. As superior of the Redemptorist community in Stropkov, in Eastern Slovakia, he carried out a fervent missionary activity in the three Eparchies of Presov, Uzhorod and Krizevci. With the arrival of the Communist regime, he was deported to a concentration camp with his Redemptorist colleagues. With the support of prayer he faced with courage and determination the suffering and humiliation he had to bear on account of the Gospel. His calvary ended in the prison of Leopoldov where he died worn out by suffering and sickness, forgiving his persecutors."

He spent the early years of his ministry as a parish missioner. In answer to his request to work with the Eastern Catholic Church, he was sent to Lviv to work with the Greek Catholic faithful there. At that time, he took the name Methodius.

​He was a zealous missionary in the Eparchies of Presov (Prjasev), Uzhorod and Krizevci. As superior he oversaw the installation of Greek Catholic Redemptorists in Michalovce. In 1932 he returned to Stropkov to rest and do parish work. In 1935, he returned to Michalovce where the Congregation for the Oriental Churches appointed him Apostolic Visitor to the Basilian Sisters in Presov (Prjasev) and Uzhorod. In Michalovce, he served a second term as superior from July 1936 to April 1942; he completed the church, helped found a convent, set up one retreat house and started another in the Eparchy of Uzhorod. He founded an association for women domestics, the most neglected group at the time.

Lord our God, you gave to Blessed Methodius your priest and martyr outstanding bravery in the face of trials and torture.

Through his intercession, may we remain faithful to the Gospel of truth.

We make this prayer through Our Lord Jesus Christ your Son, who lives and reigns with you in the unity of the Holy Spirit, One God for ever and ever. Amen

​During the Second World War, the Slovak State suspected the Redemptorists of anti-State propaganda since they were helping Ruthenians in a Slovak nationalist situation. Since Fr. Trcka was the chief suspect as superior of the house, to save the community he resigned his post as superior. In 1945, at the end of the war, the Redemptorists established the Vice-Province of Michalovce. Fr. Trcka was appointed the first Vice-Provincial on 23 March 1946. He encouraged the Redemptorists' return to Stropkov where they worked until the Communists came to power.

On the night of April 13 and 14, 1950, all religious communities were suppressed by the Czech government. Fr. Trcka was arrested, tortured and condemned to 12 years imprisonment. In 1958, he was transferred to the prison of Leopoldov. He was suffering from pneumonia contracted during solidarity confinement, which was imposed on him for singing a Christmas carol. As a result of those harsh conditions, he contracted tubercolosis. Finally, he died in his own cell on 23 March 1959, after forgiving his persecutors. In 1969, his remains were transferred from the prison cemetery to the Redemptorists' Church of the Holy Spirit at Michalovce.

Pope John Paul II proclaimed him to be Blessed on November 4, 2001.

(2) Sacramentary and Lectionary Supplement, The Congregation of the Most Holy Redeemer, 2007.

​(3) Video source: The Redemptorist of the London Province, <http://www.redemptorists.co.uk/who-we-are-2/redemptorist-saints/17-blessed-dominc-methodius-trcka.html>.