PHDC Learning Centre The Learning Centre was in session every Sunday from 24/02/2019 to 20/10/ 2019 except for school and public holidays and church feast days.  An average of 20 children, mostly from Tamil medium schools, turned up for each session

There was also a class for pre-school children to prepare them with basic reading and writing skills through fun literacy activities.

Three Learning Centre students and the son and daughter of two FINs were given cash incentive awards totaling RM535.00 for scoring grade ‘’A’’ in various subjects in their 2018 final term school examinations.

Besides studies, the students were also taken on an outreach visit to the Home For The Aged (Simee) on 15/09/2019 where they learned to interact and care for the aged through songs and dances and feeding them lunch.

On 13/10/2019, a BBQ party with food, dance presentations by the students was held and prize awards were given to the most improved student at pre-school to lower primary level, upper primary and lower secondary levels.

On 20/10/2019, the students went for an outreach trip to the Taiping Zoo and Spritzer Eco Park as part of an incentive and educational programme.

PHDC in conjunction with the medical team from Hospital Raja Permaisuri Bainun, Ipoh, organized a ​ Blood and Organ Donation  at the Parish Hall on 24/03/2019. A total of 68 parishioners donated blood and 45 registered for organ donation.

On 07/07/2019, PHDC collaborated with Klinik Kesihatan Simee and Pejabat Kesihatan Kinta and held a​ Health Screening Day at the Parish Hall where parishioners and residents of Ipoh Garden were invited to screen for Body Mass Index, blood sugar, blood pressure, dental health, vision test, mammogram and pap smear as well as to attend health talks and consultation on various health issues.    It was estimated that about 500 people responded to the event. 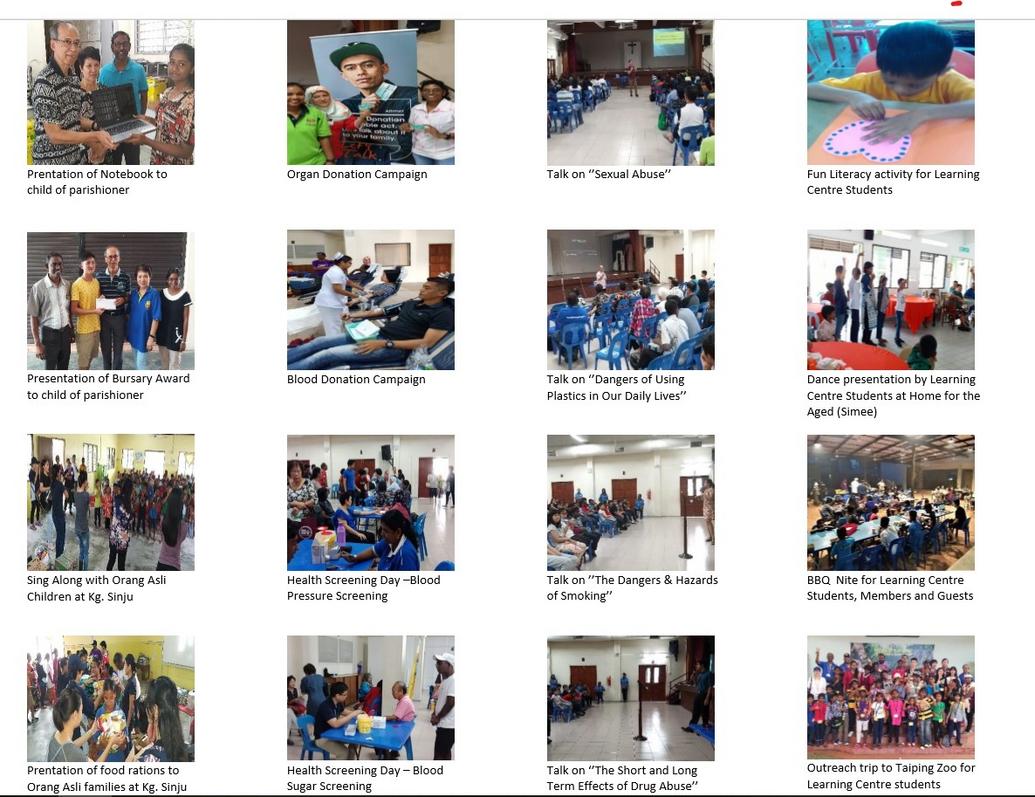 Talks on ‘’Drugs and Sexual Abuse’’ by a doctor from Hospital Raja Permaisuri Bainun and ‘’Dangers of Using Plastics in our Daily Lives’’ by a consultant in plastics technology organised by PHDC was held on 28/04/2019 in the Parish Hall and attended by about 100 Sunday School Form 1 to 4 students and OMPH parishioners.

Another two talks on ’’The Dangers and Hazards of Smoking’’ and ‘’The Short and Long Term Effects of Drug Abuse’’ by two government doctors was organised by PHDC in collaboration with the Sunday School Facilitators for the Sunday School students was held on 25/08/2019.

As part of PHDC’s long term strategy of helping the underprivileged and marginalised families to improve their quality of life through better education for their children, six children of FINs who were accepted by public universities for degree courses were given tertiary education start-up aid of RM2,000.00 each

In addition, two children of OMPH parishioners were also given similar tertiary education start-up aid and one was awarded the PHDC-OMPH Bursary Award of RM3,000.00.

Computer Notebooks were also given to one child of a FIN and two children of parishioners to assist them in their studies and assignments. ​Moreover, eight children of FINS received monthly education aid, school bus fares aid and tuition fees aid.

The Parish Human Development Committee (PHDC) is the official body in the Parish of our Mother of Perpetual Help (OMPH) in matters pertaining to the promotion of charity, integral human development and justice and peace.  The activities organised in 2018/2019 were in the following areas:

PHDC continued with its mission objective of providing monthly food rations to   47 eligible families called “Friends-In-Need” (FINs) during the period under review, from November 2018 to October, 2019 and also gave a set of school uniform to each child of the FINs who attended the Learning Centre classes at the start of the 2019 school year.

PHDC also gave out compassionate aid, nursing care aid, medical aid, hospital travel aid and bereavement aid to the FINs as and when the need arose

RM3,500.00 was contributed by PHDC to a foreign worker who is a Hospitality Minister for the Tamil Mass to repair and rebuild his family home in Tamil Naidu, South India which was severely damaged by storm and flood due to Cyclone Gaja on 15/11/ 2018

PHDC donated a sum of RM2,200.00 for building  a toilet/bathroom facility in a village situated in the remote interior.

The traditional Christmas buffet lunch for the FINs took place at Wallace House and St. Mary’s Chapel on 16/12/2018 and a Deepavali gift of RM100.00 in cash was given on 21/10/2019 to each of the 41 FINs for them to celebrate the festival as most of them were Hindus.