Gaspar Stanggassinger was born in Berchtesgarden, Germany, on 12th January 1871. He was the second of 16 children and used to engage his brothers and sisters with preachings and processions. In 1890, after his baccalaureate diploma, he entered the diocesan ministry. During this time it became clear to him that the Lord was calling to live a religious. In spite of his father's opposition, he entered the novitiate the same year and was ordained a priest in 1895. (1)

Gaspar entered the Congregation with the intention of preaching the Gospel to the most abandoned. Instead, his superiors appointed him to form future missionaries. In addition to teaching, he gave pastoral assistance at churches in neighboring villages, especially by preaching. He was deeply devoted to the Eucharist, and in his preaching he invited all to have recourse to the Blessed Sacrament in times of need and anxiety. (2) 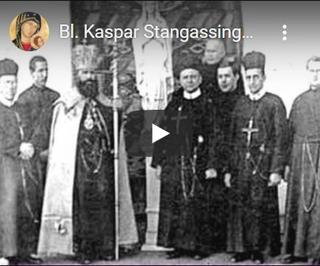 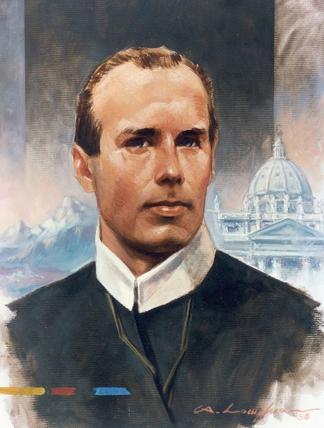 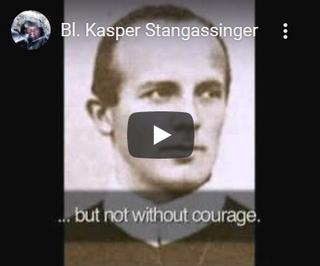 Gaspar used to say, “The saints have a special intuition. For me, who am not a saint, what is important are the simple eternal truths: the Incarnation, the Redemption and the Holy Eucharist.” (2)

Each week he spent 28 hours teaching in the classroom and yet was always available to the boys. On Sundays he never failed to offer his help at the churches in the neighboring villages, especially by preaching. Even with such a schedule of work he was always patient and understanding with the needs of others, particularly the students who saw in him more a friend than a superior. Although the rules of formation at that time were very strict, Kaspar never acted harshly, and anytime he had the impression that he had wronged someone he immediately apologized humbly. (3)

In 1899 the Redemptorist opened a new seminary in Gars. Father Stanggassinger was transferred there as director. He was 28 years old. He only had time to preach one retreat to the students and to participate in the opening of the school year. On September 26 his earthly journey ended on 26 September 1899 because of peritonitis. (3)

This simple seminary prefect was an everyday hero who was loved by everyone who's lives he touched, especially by his students. The cause of beatification began in 1935, with the relocation of the body to the side chapel of the Gars church.(5) Bl. Gaspar was "full of unusual charity...a model for today's youth," according to documentation on his beatification, a statement that's just as true today. (4) Gaspar used to say, “The saints have a special intuition. For me, who am not a saint, what is important are the simple eternal truths: the Incarnation, the Redemption and the Holy Eucharist.” He was declared blessed by John Paul II on April 24, 1988. (2). The feastday of Bl. Gaspar Stanggassinger is on 26 September. (6)

​Reference: (1) Sacramentary and Lectionary Supplement, The Congregation of the Most Holy Redeemer, published 2007; (2) The Redemptorist: https://redemptorists.net/redemptorists/saints/stanggassinger/ (3) Catholic Online: https://www.catholic.org/saints/saint.php?saint_id=7349; (4) To Do What the Day Demands: The Life of Father Kaspar : http://www.liguori.org/to-do-what-the-day-demands.html; (5)  Redentoristas: https://www.provinciadorio.org.br/beatos/exibir/81/Beato-Gaspar-Stanggassinger.html.; (6) Feast of Bl Kasper Stanggassinger: http://www.redemptorists.co.uk/news-and-events/news-items/428-feast-of-bl-kasper-stangassinger.html