His first assignment was to St. Philomena’s in Pittsburgh where he served for six years as assistant pastor with (Saint) John Neumann as pastor and superior of the community. He then served as superior of the community for three more years. During this time, he was also the novice master. In 1854, he was appointed pastor of St. Alphonsus in Baltimore, and in 1857 pastor of Ss. Peter and Paul in Cumberland as well as prefect of students there and in 1862 in Annapolis, Maryland. Replaced as prefect of students, he preached missions in German and English throughout the Northeast and Midwest United States. (2)

His availability and innate kindness in understanding and responding to the needs of the faithful, quickly made him well known as an expert confessor and spiritual director, so much so that people came to him even from neighboring towns. Faithful to the Redemptorist charism, he practiced a simple lifestyle and a simple manner of expressing himself. The themes of his preaching, rich in biblical content, were always heard and understood even by everyone, regardless of education, culture, or background. A constant endeavor in this pastoral activity was instructing the little children in the faith. He not only favored this ministry, he held it as fundamental for the growth of the Christian community in the parish. In 1854, he was transferred from Pittsburgh, to Baltimore, then Cumberland in 1857, and to Annapolis (1862), all the while engaged in parish ministry and serving in the formation of future Redemptorists as Prefect of Students. Even in this post, he was true to his character remaining always the kind and happy pastor, prudently attentive to the needs of his students and conscientious of their doctrinal formation. Above all, he strove to instill in these future Redemptorist missionaries the enthusiasm, the spirit of sacrifice and apostolic zeal for the spiritual and temporal welfare of the people. (1).

After a year as Curate of St. Mary's Parish in Detroit, Michigan, Fr. Seelos was assigned in 1866 as Pastor of the Church of St. Mary of the Assumption, New Orleans. However, his ministry in New Orleans was destined to be brief. In September of that year, exhausted from visiting and caring for victims of yellow fever, he contracted the disease. After several weeks, he died on October 4, 1867, at the age of 48 years and 9 months. (3).

Pope John Paul II beatified Fr. Seelos in St. Peter's Square on April 9, 2000. In the beatification homily, the Pope stated: "Today, Bl. Francis Xavier Seelos invites the members of the Church to deepen their union with Christ in the sacraments of Penance and the Eucharist. Through his intercession, may all who work in the vineyard for the salvation of God's people be encouraged and strengthened in their task." (3).

The memorial of Bl. Seelos is commemorated in the Martyrology on October 5.

Francis Xavier Seelos was born on January 11, 1819 in Fussen, Bavaria, Germany. He was baptized on the same day in the parish church of St. Mang. Having expressed a desire for the priesthood since childhood, he entered the diocesan seminary in 1842 after having completed his studies in philosophy. Soon after meeting the missionaries of the Congregation of the Most Holy Redeemer (Redemptorists), founded for the evangelization of the most abandoned, he decided to enter the Congregation and to minister to the German speaking immigrants in the United States. He was accepted by the Congregation on November 22, 1842, and sailed the following year from Le Havre, France arriving in New York on April 20, 1843. On December 22, 1844, after having completed his novitiate and theological studies, Seelos was ordained a priest in the Redemptorist Church of St. James in Baltimore, Maryland, U.S.A. (1). 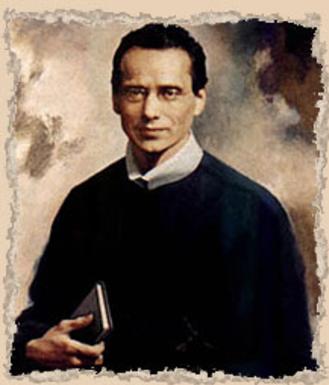